DUE TO THE CURRENT COVID-19 SITUATION, ALLEN ORGAN IS CANCELLING OUR SPRING CONCERT SERIES. CHECKS WILL BE RETURNED, AND ACCOUNTS WILL BE CREDITED TO THOSE WHO PAID ONLINE WITH CREDIT CARD OR PAYPAL. 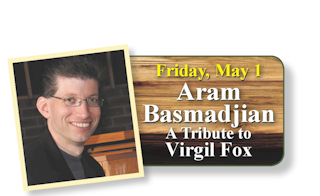 Aram Basmadjian will unleash the full resources of the Allen Organ in a tribute to the legendary organist, Virgil Fox. Aram is no stranger to Octave Hall and returns by popular demand. His diverse program of masterworks and transcriptions will provide a musically rewarding experience as he conquers the "King of Instruments."

Aram was a student of Virgil Fox's protégé, Ted Alan Worth, who encouraged him to pursue a concert career. He toured for many years with Community Concerts commanding a rigorous concert schedule with performances in over 50 cities throughout the United States each year. These programs utilized Aram's own four-manual Allen touring organ. Aram currently serves as the organist/choirmaster at Trinity Episcopal Church in Bethlehem, PA, and is also the Vice President of Sales at Allen Organ Company. 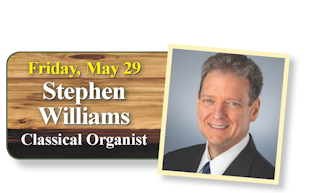 Stephen C. Williams is Canon for Music Ministries and the Performing Arts at Cathedral Church of the Nativity in Bethlehem, PA where he conducts the choral program, administers the Cathedral Arts series of musical offerings, and is primary organist for Cathedral and Diocesan liturgies and events. As soloist and accompanist, he has toured France, England, The Netherlands, Canada, and the US.

Stephen has been guest artist on a number of organ recital series, and has appeared as soloist with the Allentown Symphony, Monocacy Chamber Orchestra and SATORI Chamber Ensemble, and with ensembles such as the Philadelphia Brass, Allentown Band, and Hill-to-Hill Brass Quintet.

We welcome Stephen at his debut performance at Octave Hall! 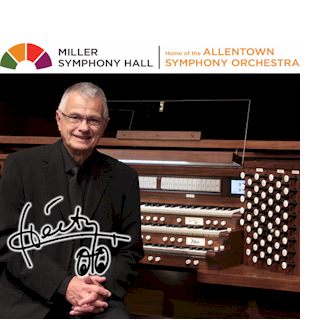 Maestro Hector Olivera is a Buenos Aires native, studying music from the age of three and composing his first suite at nine years old. Olivera continues to dazzle audiences with his performances on the organ, and after a Sunday performance with Allentown Symphony Orchestras own Diane Wittry, he will grace the stage with a solo blow-your-socks-off performance!

TICKETS AVAILABLE ONLY AT www.millersymphonyhall.org